Christian Paetz, CEO
Every house has an intricate network of plumbing, and a water leak is undoubtedly one of the worst nightmares for a homeowner. What if the water leak occurs when you are away for the weekend? It could be a burst pipe, an overflowing sink, or a dripping dishwasher—any leak can potentially flood your house. It will not only cost thousands in damage, but you might end up vacating your house for water restoration specialists to work on drywall replacement, mould removal, and more. According to EPA (Environmental Protection Agency), in the U.S. alone, household leaks waste around 1 Trillion gallons of water annually. Besides, water damage and mould cost the insurance industry billions of dollars annually worldwide. On top of that, only two-third of all households in Western countries have insurance coverage for their home. Despite the considerable damage and losses caused by water leakage, homeowners are often reluctant to install traditional leakage protection systems asthey require a certified installer or plumber, which costs both time and money. Founded in 2018, Aqua-Scope Technologies—an Estonia-based company, is perfectly poised to address these challenges for homeowners and small building owners through its non-invasive 360-degree water leakage protection solution.

Christian Paetz, CEO at Aqua-Scope Technologies, explains that typically plumbers cut into the pipe near the main shut-off valve to install the leakage protection system, creating a point-of-no-return and further weakening the water pipe system. “Every leak starts with the first drop of water leaving the pipe and every connection in the water pipe system is a possible leak point. And the sooner you find out something is wrong, the lesser damage you bear,” asserts Paetz. To this end, the Aqua-Scope water leakage protection system was designed with a mission to provide comprehensive and effective water leak protection without any pipe-cutting and can be easily installed within minutes by the homeowner without the help of a certified installer/plumber. Users can set up and maintain Aqua-Scope systems through the Aqua-Scope app.

The Aqua-Scope system monitors the home’s water supply 24 hours a day, detects leaks immediately, and the easy to retrofit motorised actuators automatically shut off the water supply depending on the urgency and amount of outflowing water. Also, it alerts the residents via the internet and mobile phones.

Through a highly sensitive pressure sensor and a network of distributed sensors placed on strategic points in the home, the system permanently analyses the situation in the homeowner’s water pipes and detects all types of leaks well before they cause any damage. “We have developed an 'easy to use and attach' sensor that leverages acousticleak detection technologyto analyse what is going on in the water pipe system and provideinformation about the quantity, frequency, and time of water consumption,” states Paetz.Often, the traditional flow sensors used in leakage detection systems cannot differentiate malfunction from normal water take for washing, drinking, and cleaning. When installed in a house, the Aqua-Scope system’s single central sensor evaluates sound waves within the tap water network to detect when water is normally utilised for household chores. This information, in the form of current water consumption and comparative values, provides the homeowner with valuable feedback on their water usage.

Paetz explains that detecting the water flow using the Aqua-Scope pressure sensor also allows locating other malfunctions such as tiny leaks or faulty toilet flappers in the pipe inside the wall. The flood sensor is placed in convenient locations to determine water leakage, and the motor servo, both ball valve and gate valve, are effectively placed on top of an already existing shut-off valve. Aqua-Scope offers BVS (Ball Valve Servo), an intelligent ball valve controller that provides maximum flexibility to mount on straight pipes and on pipe elbows by adjustable clamps position. On the other hand, Aqua-Scope's Gate Valve Servo (GVS) can be placed on already installed (angled) gate valves commonly used in central Europe across Austria, Germany, Switzerland, and other countries. Both BVS’ and GVS’ wireless communication capabilities are compatible with several industry standards, including WIFI, Z-Wave, and LoRaWAN, for easy integration into existing networks. Besides, both servos can seamlessly receive commands from the flood sensors or other smart home system gateways.

Driven by the quest to improve its system, Aqua-Scope's international team of hardware engineers, software developers, product designers, and marketers aims to add more capabilities to help homeowners efficiently prevent water damage. The company’s interest in leveraging ultrasonic flow meters for measuring the flow rate of water in the pipes is just another step in that direction. Paetz explains that it’s crucial to measure the temperature and relative humidity at the sensor’s location to prevent mould in the house. Being experts in the area, Aqua-Scope leverages silicon sensors to detect these parameters and ensures minimum water damage and mould growth. With its administrative and financial centre in Tallinn, logistics in Germany, and electronics work in Shenzhen, Aqua-Scope plans to expand its footprint in international markets. “We’re a 21st century company with people that share the same vision and work together,” notes Paetz. 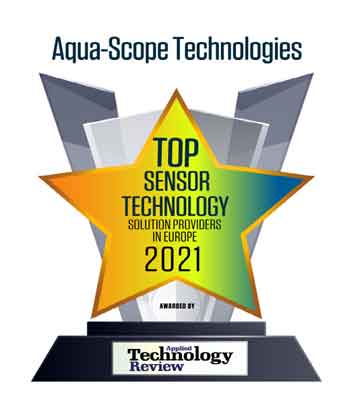 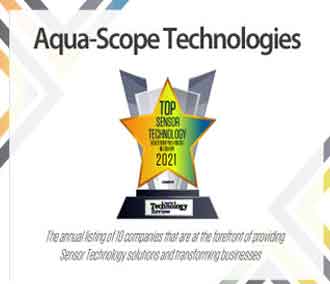